Join me as I set up my monthly and weekly layouts in my bullet journal for October // www.prettyprintsandpaper.com

Despite my lack of posting, I was still indeed using my Bullet Journal faithfully throughout October – “stuff” got real in my life so the first thing that left my plate was blogging.  Between mid-semester assignments being submitted (and graded…), being in a ton of weddings, weekend commitments, I needed my Bullet Journal more than ever.

As many other “bullet journalists” know, the best part of the system is that it is adaptable.  It is highly debated whether these adaptations really can be called a bullet journal anymore – but that’s for another day.

In October I played around with a few things. Let me share what I tried and what I ultimately learned from those experiments. 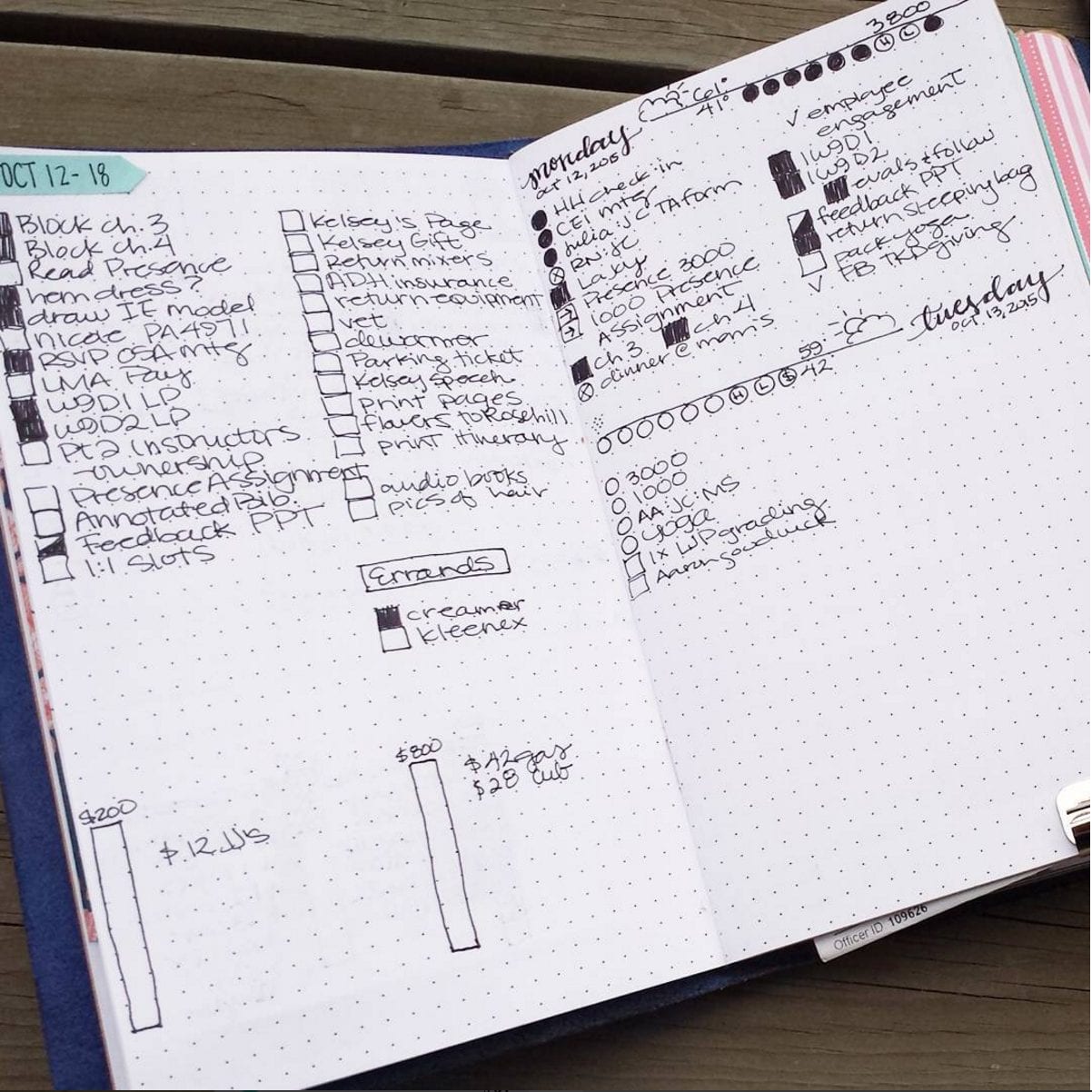 Dailies. Those who have been around know my love for weekly layouts – they keep everything in sight and helps me as a forward planner to keep tasks straight.  I am a strong believer in continuing to test even the beliefs we hold dear- so I wanted to make sure I was actively CHOOSING the style that worked for me.  For one week I honored more of the original Bullet Journal method doing first a weekly overview and then daily spreads.

What I gained: I liked having more space for tasks that came up without feeling constricted by the “layout,” and got to play with fun headers

What I lost: As I suspected, I hated not being able to plot tasks to certain days when it was applicable! I found a bit of loss on feeling prepared for meetings or things happening the next day.

What I learned: Weeklies are reconfirmed to be my jam.  However, I DID love having more space for the weekend, where my lists are undoubtedly longer.  Which led to another experiment, which I am taking with me to November… 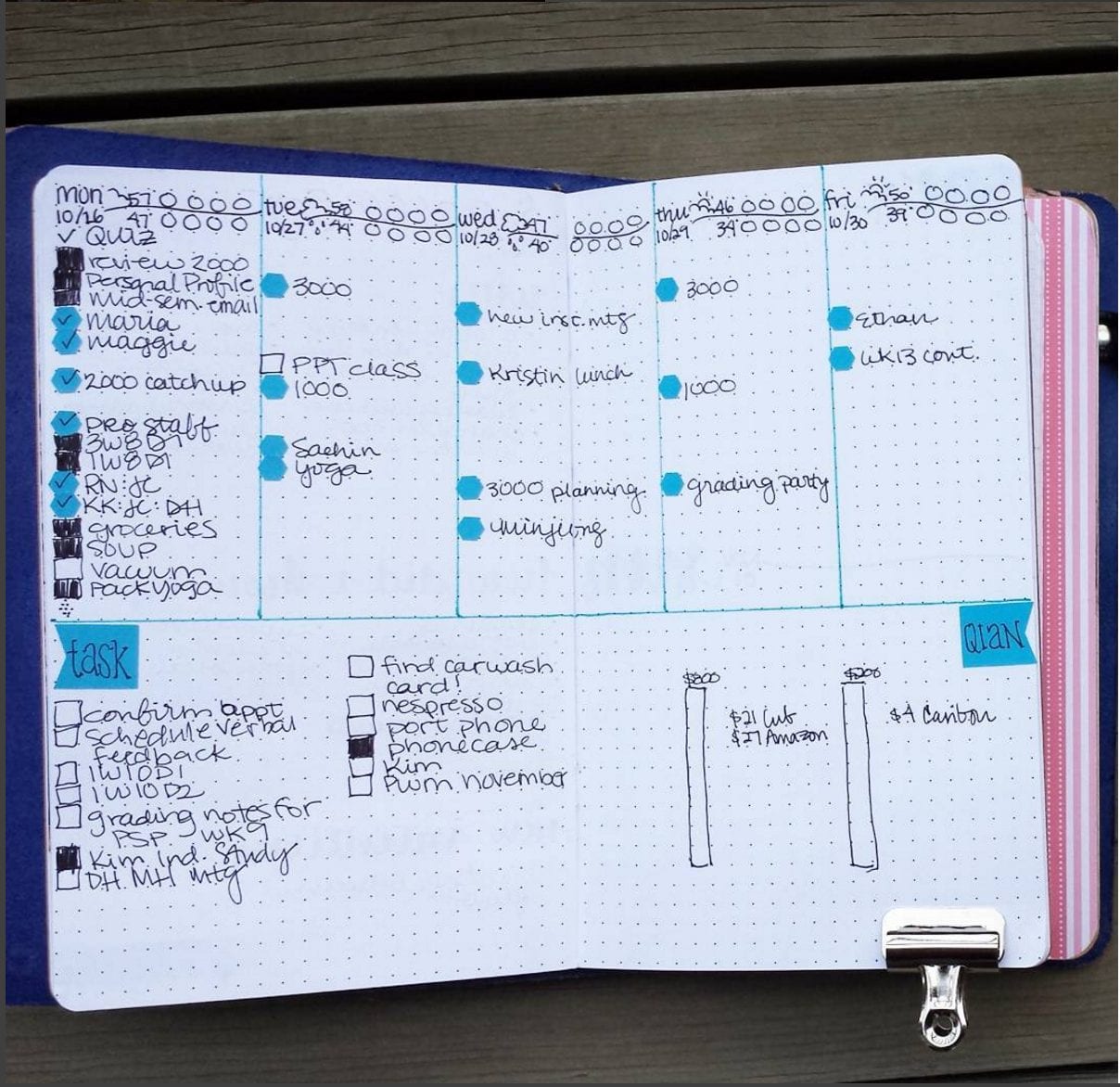 Part one: Expanded week.
I started doing my week across just FIVE days on the spread instead of the 7.  From the dailies lesson, this compromised by giving me more space in each day without losing the function of glancing at the week.

For fun, I started adding the little Hexagon stickers from TheResetGirl to indicate my appointments and meetings.  It helped visualize what I was supposed to be preparing for.

What I gained: More room for tasks, more white space which eases my senses

What I lost: If I had a task for the weekend, I had another step to go through before adding it

What I learned: Mondays get full of meetings, quickly.  It’s a mess – I want to try limiting the number of hours I’m in meetings per day going forward. I’m not sure how easy that will be with colleagues, but I do feel scattered as a result of having so many of them.  (Imagine, acting on the action items that come out of those meetings!) 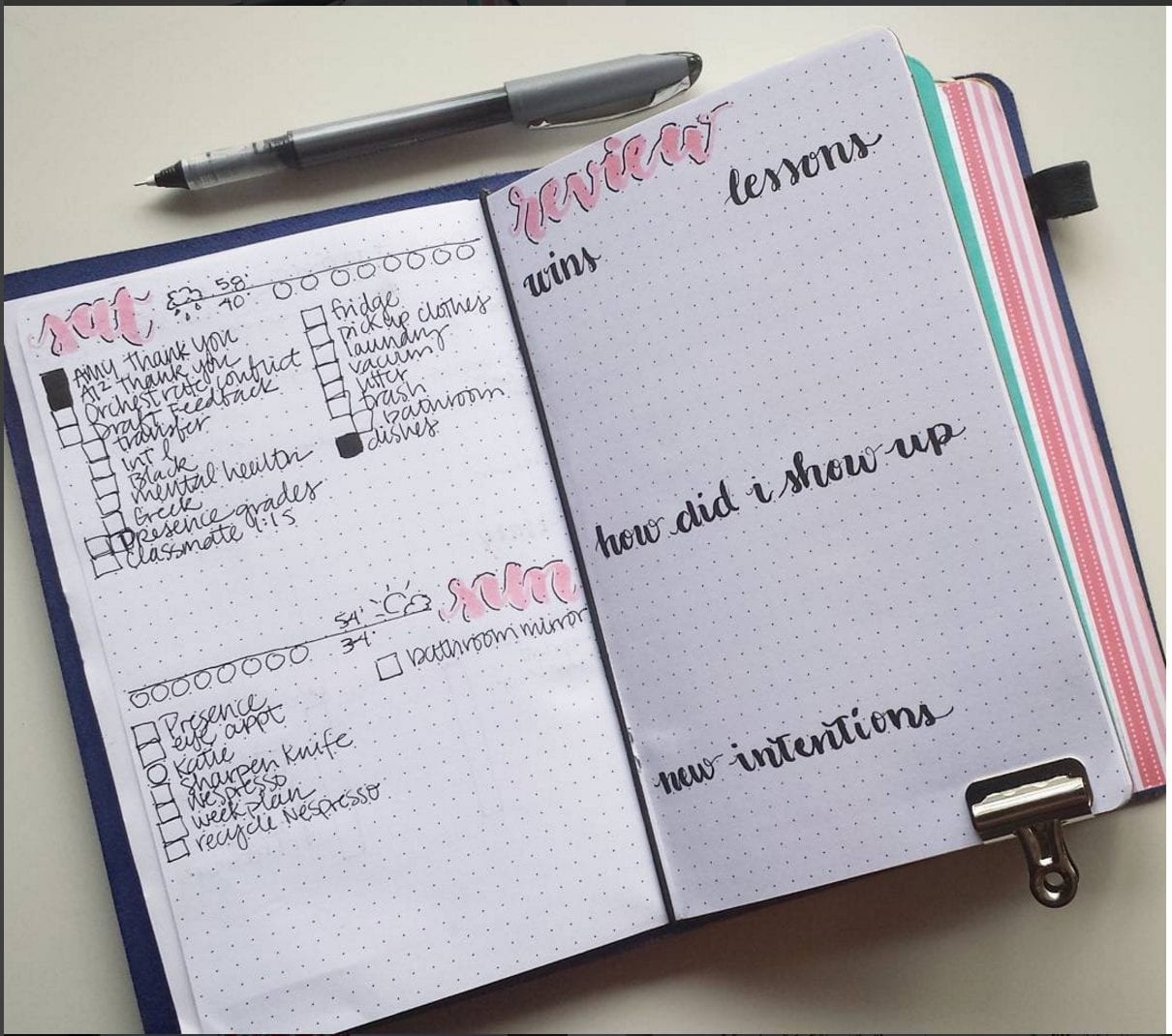 Part two: Weekend review.  I’ve always admired the way Kim (@TinyRayofSunshine) does a weekend review and I wanted to add it to the structure of my Bullet Journal. And thus, this page was born! Immediately after the Expanded Week, I have these half pages for the weekend for all of the tasks I hope to accomplish (a lot of these are grading… yeesh!).  Opposite you can see the review.  I have already modified the prompts but I love that it’s actually BUILT IN now to help me reflect on the week. One of my colleagues thinks deeply about how he shows up in the world on Sundays and it’s a powerful exercise in leadership.

What I gained: Space for my thoughts, a moment to PAUSE and think about whether I am showing up the way I want to, more space for the weekend!

What I lost: Immediate view of the weekend for tasks I think of during the week, some more pages (but oh well on this one!)

What I learned: I love the extra space and the intentional reflection time.  I’ve only done this one week so far so I need to work on it more to glean the lessons yet – but it’s sticking around for now!

Just when I thought things were at a plateau, new ideas come…. Hey, planner peace is fleeting – but I’ll keep doing what works! What are you experimenting with?

Jessica is.a Minnesotan handlettering artist, leadership educator, and bullet journal blogger. She is passionate about working with people to uncover their personal power and potential through connection, creative planning, and calligraphy. You can find her at a local ice cream shop, teaching, on Instagram (@prettyprintsandpaper)

Motivation for Change in the New Year: My Current Favorites

Planning for 2020: Creating Balance and Self-Care