How to: Calligraphy Flourishes + Free Printable

My favorite supplies and tips for learning calligraphy flourishes - plus a free worksheet! // www.prettyprintsandpaper.com

Once I got some basics down, watched a few tutorials from the wonderful Pieces Calligraphy and Postman’s Knock, I became intrigued by the idea of flourishing.  I’ve been dreamily staring at different artists’ work and I wondered how I could get there too – it just seemed so effortless in their videos where I felt super awkward and unsure of where these lines should go!

After some playing around, I gathered some of my tips and tricks as a beginning flourisher.  As a University instructor, I found that the Master Teachers I learn from have been pretty removed from these beginning stages of learning, which made it incredibly difficult for them to articulate to me how to navigate certain scenarios in the classroom.  I found myself being a decent trainer of new instructors because I was closer to the learning experience.  In that spirit, these are some of the things that helped me, so hopefully they help you too as a fellow learner. 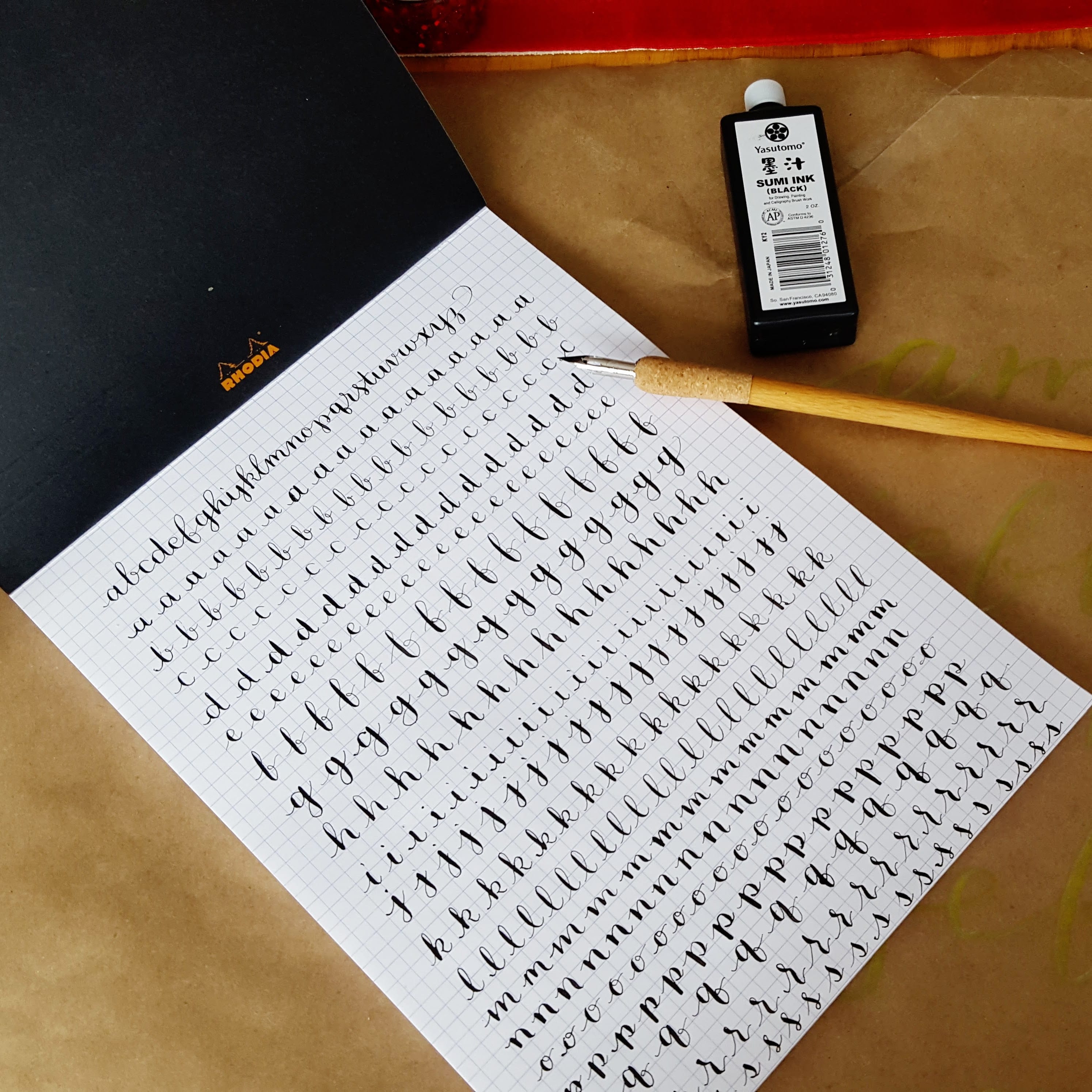 There’s so many different types of lettering and mediums, so you can practice the lines and the flow with everything from a pencil, a gel pen, to brush pens, to pointed pen.  Here are a few of my personal favorites for all of the above (Note: * Some of the above links may be affiliate links. In plain English, this means that I may receive a small commission (at no cost to you) if you subscribe or purchase something through the links provided. You will never see me post a link to a product or service that I haven’t used myself and love! (Learn more here)

I’ve used regular printer paper but I’m LOVING using the Rhodia dot pad for practice because it is so smooth and takes ink well without bleeding.

I used a few different approaches – first, I started studying the flourishes of artists I admire.  Some of my favorites include @ThePostmansKnock, @paola_koala, and @amandaarneill.  I would pick some photos that I love and looked at their flourish forms – which letters did they flourish from? What are the shapes they create? How do they connect? 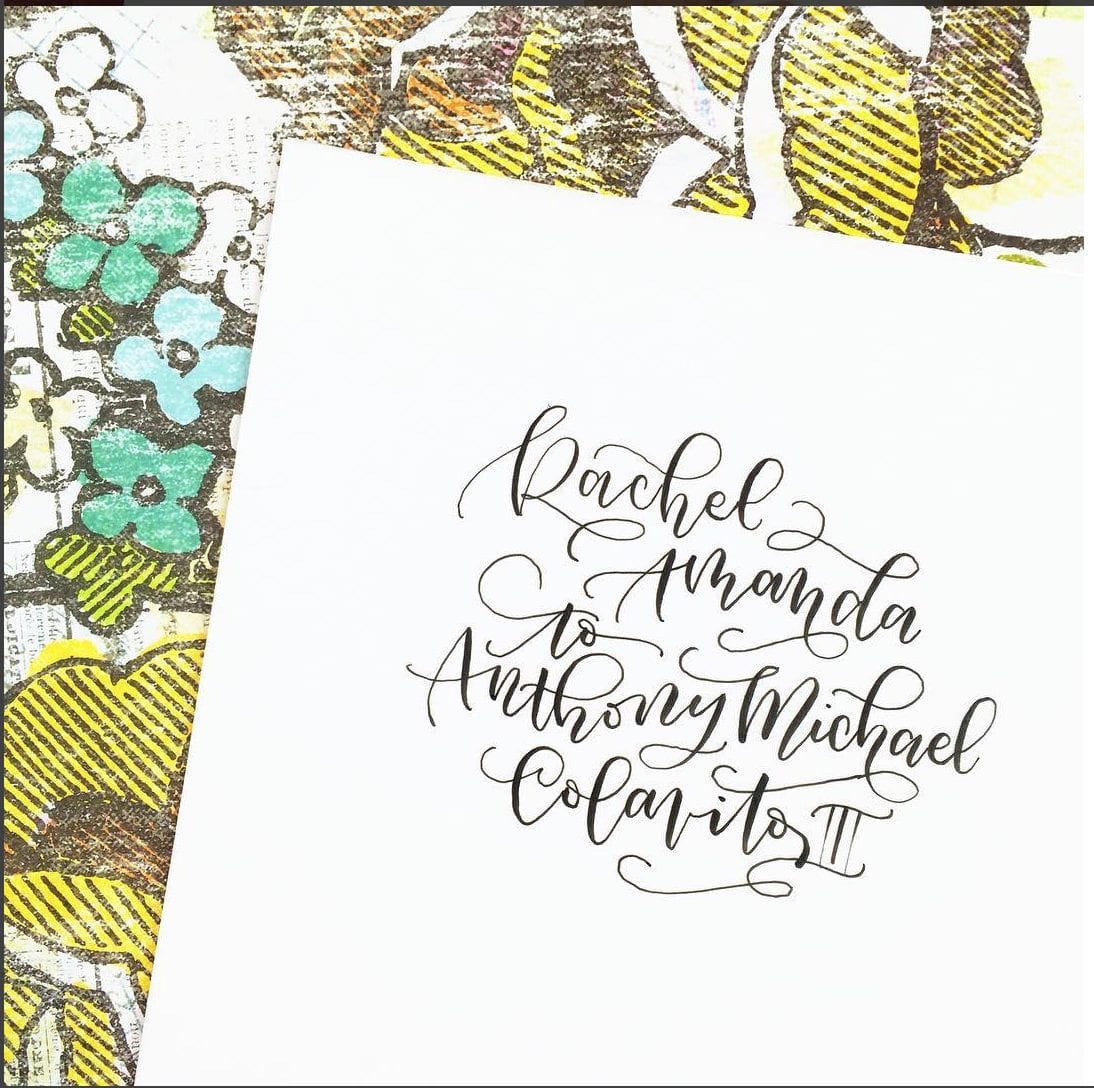 To help learn and practice calligraphy flourishes, it helps to study those of awesome artists like @AmandaArneill // http://www.prettyprintsandpaper.com

In Amanda’s photo I’m looking at how she enters into the R, the end of the R, the top of the d in Amanda, and how she’s connecting the H and the T across two different words (!).  Her work is a lot of swoops with just a few loops, which delicately fills in the white spaces in between her words.  Most of her flourishes are hairlines, without the thick downstrokes which keeps it light and modern. I just love Amanda’s work because she flourishes without being overwhelming. 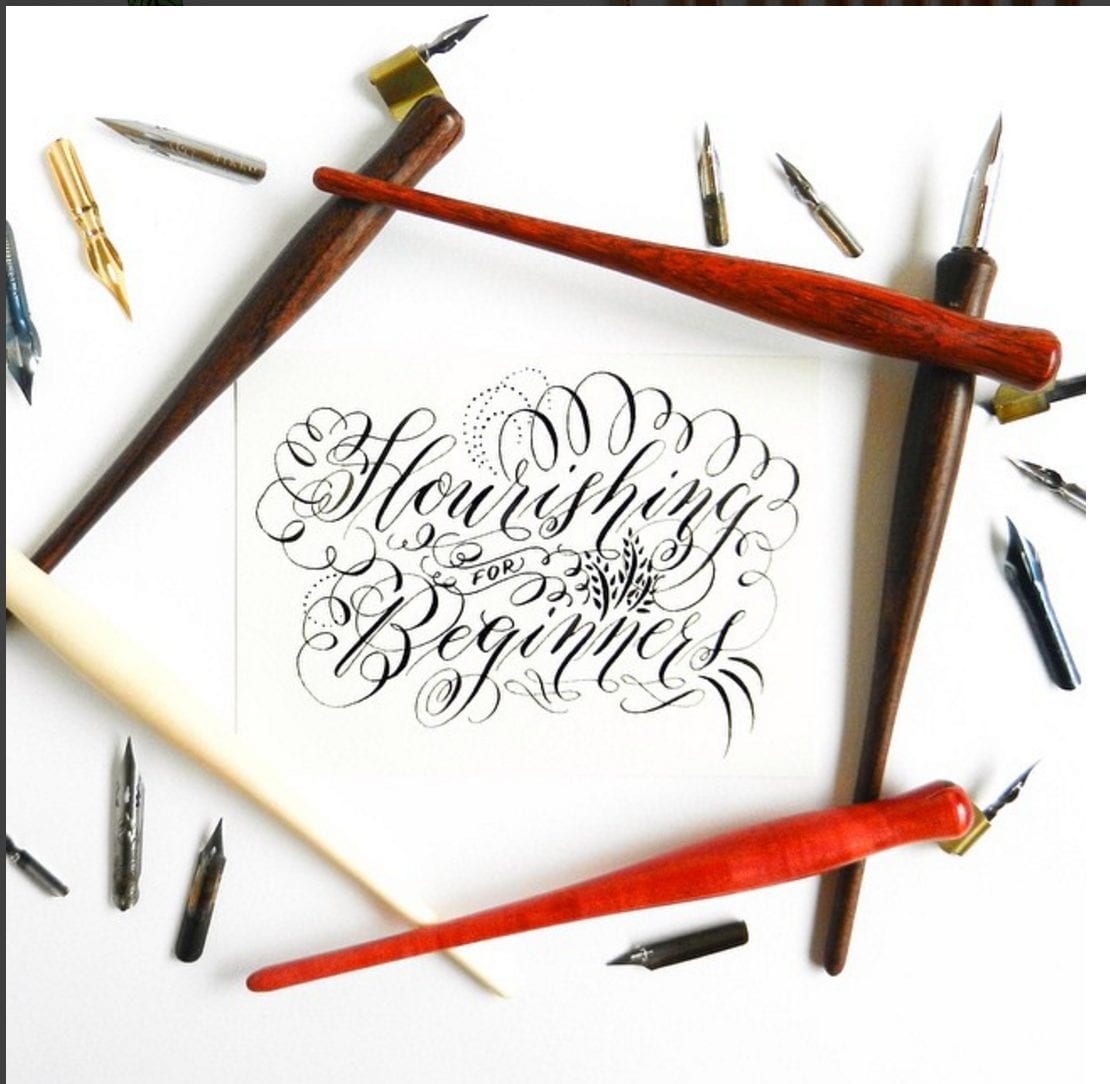 To help learn and practice calligraphy flourishes, it helps to study those of awesome artists like @thepostmansknock // http://www.prettyprintsandpaper.com

Lindsey does some amazing work – and when I look at this I have to deconstruct each flourish so I can study how the lines flow.  She adds down thickness to the downstrokes with her pointed pen, which adds more visual intrigue. She is unafraid to loop over and over again and create an overall image and effect.  (She also has an awesome free flourishing worksheet on her blog that you should check out)

From all of these images I pulled out a few different flourish forms to create drills for myself.  I practiced with my pointed pen, and wanted to develop some muscle memory to make flourishing easier.  The more I did the drills the more I realized there is a way each line wants to be drawn – and I have to just go with it.  This sounds very un-technical but I believe it’s true!  If I focus on feeling my pen on the paper, I can tell where the lines want to flow, so I follow.

Looking at some of the drills, you can tell if they might belong in the entry or exits on letters like y’s g’s or j’s, or if they swoop from letters like h’s t’s or the ends of words.  I start off with flourishing just a few letters per word and focus on having the embellishment feel natural.  I try to imagine what the flourish will look like before I draw it which helps guide my pen.

If you’re going for the thick-thin look, flourishes are definitely an exercise in varying your pen pressure at the right times, which got hard if I went too quickly.  This adds another layer of complexity – going fast enough to be natural but slow enough to be deliberate with your thicker downstrokes.  This took me a few pages of drills to get down.

The part that I haven’t played with too much yet is adding additional flourishes that aren’t connected to letters.  That seems like an elusive art that I haven’t studied enough yet – but I will get there, someday. 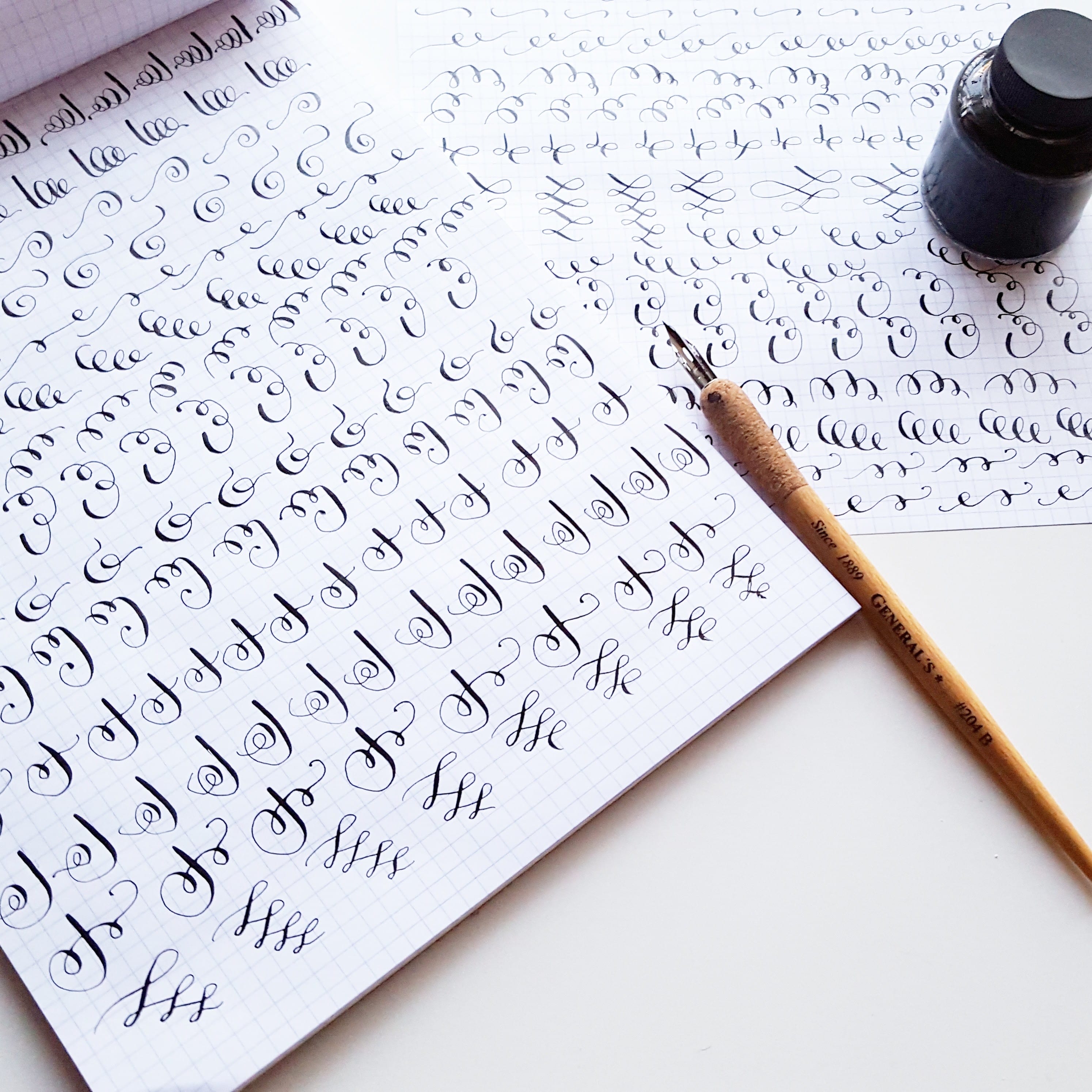 Doing the drills helped me get familiar with the swirls and loops – and then I started adding them to my actual lettering. This took some massaging but it is MUCH easier now than it was before!  The lines started flowing much more easily and now I can add them to my lettering. (I’ll upload a video using these, I promise, I wanted to get the worksheets out!) 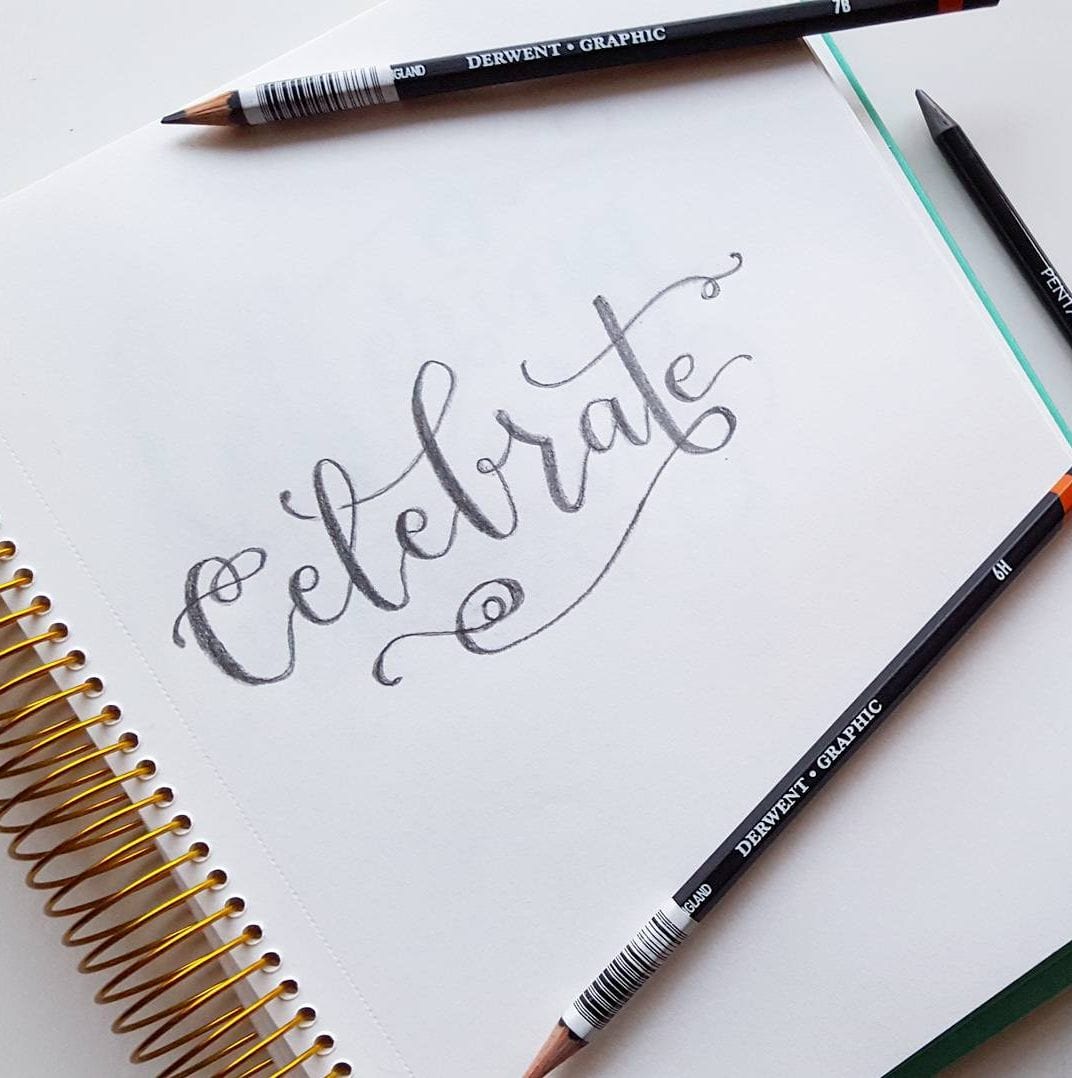 Now that I’ve done enough talking, are you ready to practice your own set of drills?? I created a very simple and hand-drawn printable for you to get started practicing your own flourishes! Click the photo below to download your own.  (For personal use only- absolutely share, and make sure to give credit!).  If you’re going for more of a traditional calligraphy style, go ahead and draw in the diagonal guidelines for the Italics (take a pencil and draw //// along the sheet and line up your downstrokes with the angle).  Modern calligraphy is more straight up and down at 90 degrees (which I tend to do). 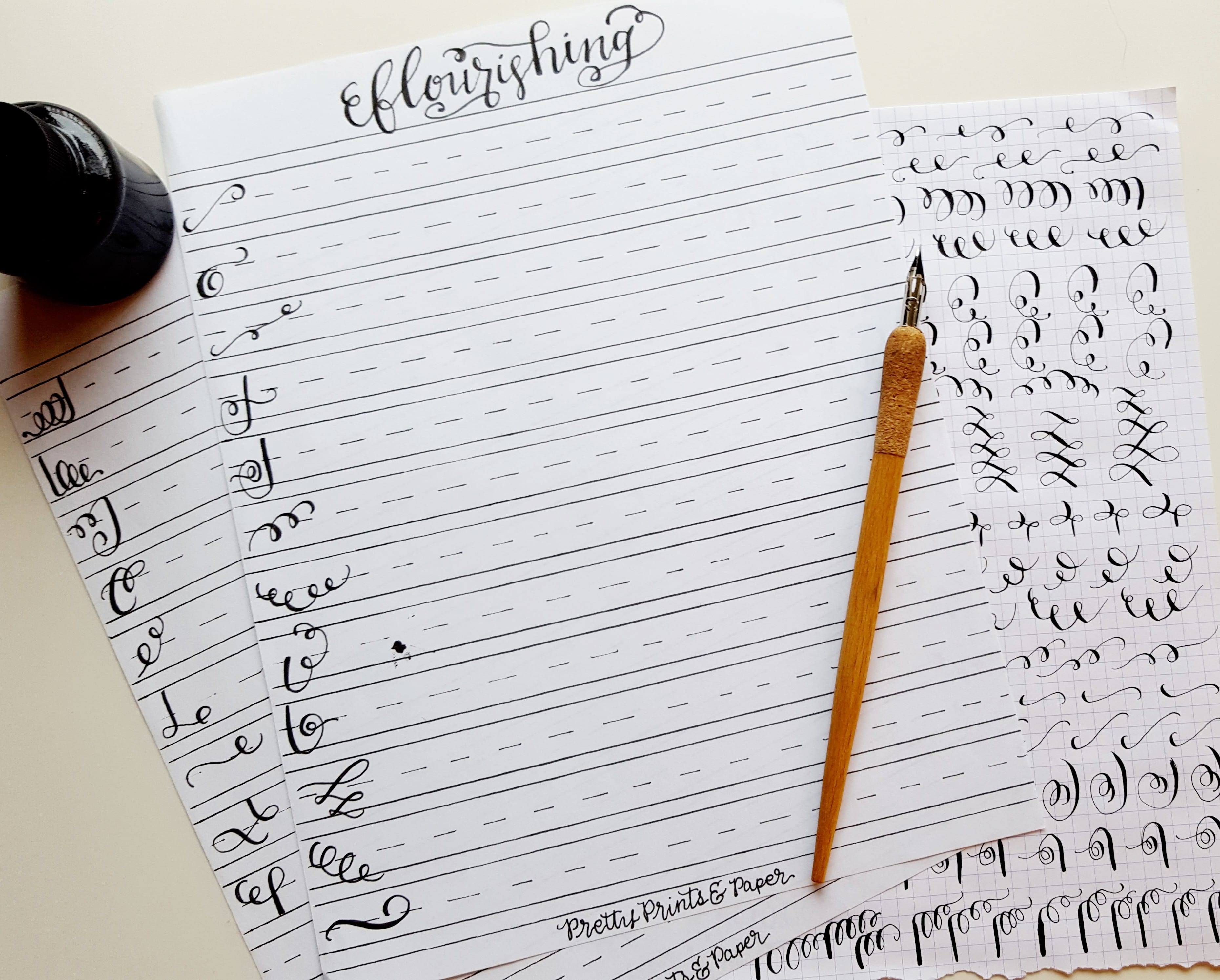 Want to dive in even more?

If you end up using them, snap a pic and share – tag me so I can see!  If this was helpful, share with a friend or elsewhere –  if you have other questions, share them  down below!

Jessica is.a Minnesotan handlettering artist, leadership educator, and bullet journal blogger. She is passionate about working with people to uncover their personal power and potential through connection, creative planning, and calligraphy. You can find her at a local ice cream shop, teaching, on Instagram (@prettyprintsandpaper)